As part of the final conference of the project “Lazareti – the creative quarter of Dubrovnik”, the opening ceremony of the renovated historical complex Lazareti was held on Sunday, July 28th. 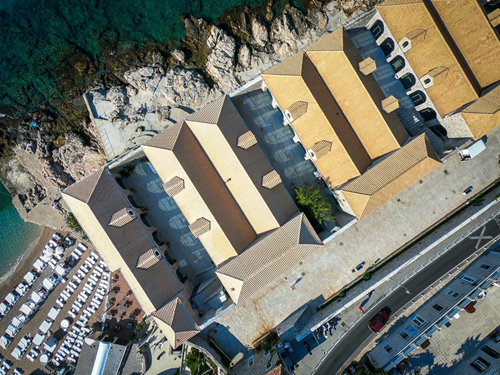 In the past, the eastern suburb of Ploče was the intersection of trade caravans and passengers from the Ottoman Empire. That is why the first quarantine for isolating passengers and goods from eastern countries was built on the plates already in 1377, because epidemics of infectious diseases often prevailed.

Lazareti, from the preserved 8 buildings and 5 yards, was renovated in 1623 on the sea side so that larger ships could approach. They had spacious warehouses for goods and livestock, and rooms for longer stay of merchants and passengers in isolation. In the 17 th century, Dubrovnik's Lazareti were the largest shopping transit centre on the Adriatic and one of the best organised quarantines in the Mediterranean.

Now, after thorough reconstruction, Lazareti has received a new life cycle through the evaluation of cultural heritage as a place of cultural and tourist attractions.

The project is worth HRK 33.8 million, of which as much as HRK 25.9 million has been ensured from EU grants through the European Regional Development Fund. A total of HRK 21,078 941.55 was spent on the reconstruction of three previously unrenovated litters, while the other funds are intended for the equipping of seven already renovated litters, as well as the development and design of cultural programs and facilities.

“The opening of the lazareth is seemingly a small step for our city, but it is extremely important and full of symbols. It is exactly 2019 the year of culture, when we mark numerous anniversaries and we can finally say – the Lazareti are finished. We know how and how to take care of our historical heritage, we have EU funds at our disposal and we have just shown that we know how to use them, that we can manage the EU with money and invest it in what is important, and that is our heritage. It is up to us to move forward," Mayor Mato Frankovic said at the opening ceremony.

Mihaela Skuric, director of the Institute for the Reconstruction of Dubrovnik, the main partner in the project, stressed that this is the first project of the Dubrovnik City Hall where European funds are invested in the reconstruction of cultural heritage and the provision of a new function and purpose, i.e. life, for the benefit of the local community.

As the future cultural center of Dubrovnik, Lazareti fully fits into the vision of sustainable destination management, and through the valorization of cultural heritage facilities and the expansion of cultural and tourist attractions is expected to make a great contribution to sustainable development at the local and regional level.

The Lazareti complex located right next to the city walls on the boards, the eastern entrance to the historical core, served in the past as a quarantine (Franc. Quarantine: forty days), an international anti-infectious measure separating and controlling people, goods and transport vehicles (ships) suspected of coming from infected areas. There are 1377 others in Dubrovnik. The Grand Council issued a provision according to which newcomers from curtain areas had to spend a month in certain supervised locations before being allowed into the city. Although there have been several quarantines throughout history in Dubrovnik, the Lazareti (whose construction was completed in 1647) were the largest shopping transit centre on the Adriatic and one of the best organised quarantines on the Mediterranean in the 17 th century.