Renovation of the Archaeological Museum of Istria, one of the largest investments in culture

The renovation of the building of the Archaeological Museum of Istria will be completed at the end of the year, and the entire complex in 2023. This is the largest investment in culture in recent years, worth about 110 million kuna. Almost half is funded by the Ministry of Culture and the rest by the Museum. 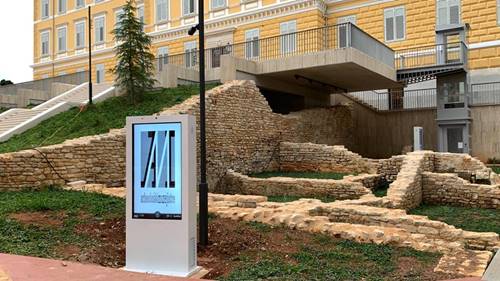 Although last year, due to a pandemic, the works on the renovation of the Archaeological Museum in Pula stopped briefly, the rebalance of the budget of the Ministry of Culture quickly enabled their continuation.

- At the end of the year, the Ministry still gave us 12 million kuna. These renovation works are the biggest investment in culture in the last few years, said Darko Komšo, director of the Archaeological Museum of Istria.

The renovation of the museum building, which preserves exhibits from Istria and the Croatian Littoral from the prehistoric, ancient and medieval periods, is nearing completion. A glass facade has already been installed at the rear of the building. Director Komšo says that the largest screen in this part of Europe, of over 400 square meters, should be installed there.

The Small Roman Theater will also be renovated and it will be able to accommodate about 2,000 people, just like in the ancient Rome. Everything will be enriched with new sites, such as the newly found old Roman road and the remains of late antique villas.

- As soon as we scratched the ground, we found the old walls. We will now present it all. They will no longer be buried. We will not walk on the ground and on some paths, but on the reconstructions of those ramparts, said Silvana Petešić, the head of archeological research.

The whole complex should become a top cultural attraction. The director of the Museum believes that this is a "big step in the integration of culture and tourism and a pledge of the tourist offer of Pula and Istria."

Sanja Cinkopan Korota, director of the Pula Tourist Board, hopes the facilities will attract many who are interested. They could also be motivated by the fact that the ticket for the Arena, which is only 200 meters away, will be valid for a visit to the entire complex of the Archaeological Museum.