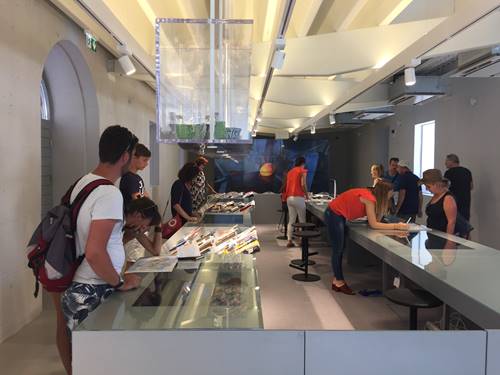 The new tourist information center and the office premises of the tourist boards of the City of Zadar and the Zadar County were opened in the newly renovated Cedulin Palace.

The opening was attended by Minister of Tourism Gari Cappelli, the mayor of Zadar, Branko Dukić with deputies, Ante Babić and Jagoda Surać, prefect of Zadar County, Božidar Longin, directors of tourist boards, Ante Rados, Mihaela Kadija and other guests.

Mayor Dukić expressed gratitude to all people who were involved in the realization of this project from the very beginning and invested their knowledge and effort to restore this historic building, especially the Ministry of Tourism for support, former mayors, designers, contractors, supervisors and Zadar conservators.

- As convincing as the claims about how Croatia, and thus Zadar, was marked as a big tourism center says a lot about the fact that tourism in our country does not happen by accident. All Croatian tourist indicators confirm this, from year to year, including now when Zadar records a 30 percent growth in tourist traffic, which is currently significantly higher than the national average. This is also shown by investments in private and public tourist facilities, such as this one with the arrangement and renovation of the Cedulin Palace, said Mayor Dukić.

Mayor Dukić was proud with the fact that this decades-old neglected space has been arranged and put into a public function for tourism, economy and culture.

- Speaking of public spaces, I must remind you that from year to year our historical core is experiencing a transformation primarily through the restoration and preservation of historical and monumental heritage, both in the culture and the economy. Finally, yesterday our city received recognition of universal monumental value through the inclusion of the Zadar walls in the UNESCO World Heritage list. Carrying this prestigious recognition, we also take responsibility towards our heritage by preserving it for future generations, concluded Mayor Dukić.

Minister Capelli officially opened the tourist information center and recalled a visit to the construction site six months ago:

- Former mayor, Božidar Kalmeta, told me: "Don't worry, you just invest your share of the money and we will solve everything". And here, as the prefect said, the deal worked out great, said Minister Capelli.

Next, he cited record tourist figures for this season. There was an increase in tourist traffic for the first six months by 23 percent, and an increase in the number of overnight stays and arrivals in June of 33 percent.

- Croatia is a small country but a country of big tourism. Tourism does not happen to Croatia by chance, but it is a consequence of the work of all those who participate in it, hence it becomes a year-round destination, said Cappeli, congratulating on the inclusion of Zadar walls on the UNESCO World Heritage list.

The words of thanks were also sent by the director of the Zadar Tourist Board, Ante Rados and the Zadar County Tourist Board, Mihaela Kadija, who emphasized that the tourist workers have now finally got a representative facility and their home.

The tourist information center construction project is a good example of synergistic action of destination management where the institutions of the city and the tourist community were involved as partners and co-investors.

The tourist center is located in the most beautiful and most representative part of the Cedulin Palace from the 13th century, which is a protected cultural property and is located at the entrance to the historic center of Zadar. The tourist center contains modern multimedia equipment and is a central place for managing all tourist activities, for the promotion and presentation of tourist facilities and improving the tourist quality of the city of Zadar and Zadar County.

Presentations of various tourist contents are planned in the courtyard of the tourist information center, as well as the possibility of holding smaller concerts and other cultural and exhibition programs.

Work on the construction and reconstruction of the tourist information center has started in 2015, and the Ministry of Tourism has allocated a total of 1.7 million kuna to the project through a grant program. The total amount of the investment was 14 million kuna.