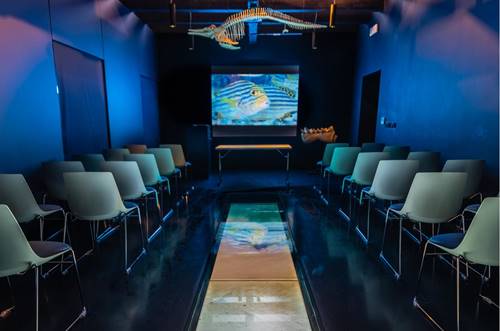 Was it very cold on Papuk 16 million years ago, was a woolly rhinoceros wandering the hills and was the sea often frozen? Was the largest animal to swim through the Miocene Sea, as today, a thirty-meter blue whale? These are some of the questions you can get the answers to if you visit the “House of Pannonian Sea” opened yesterday in Velika. It is a visitor-educational centre of Papuk Nature Park, arranged as part of the project “Geotales of the UNESCO geopark”. The adaptation and renovation cost almost 5 million kuna and the project was co-financed by the EU from the European Fund for regional development.

Numerous guests attended the opening of the “House of the Pannonian Sea”, including Assistant Minister of Environment and Energy Igor Kreitmeyer, representatives of the authorities of Pozega-Slavonia and Virovitica-Podravina County, directors of several Croatian national parks and others. On behalf of the Papuk Nature Park, everybody was greeted by director Alen Jurenac.

"All year long we are courageously heading towards the most successful tourist season in all indicators, and we are finishing it in the best possible way: the opening of a visitor-educational centre in Velika, which we hope will follow the rates of the adrenalin park in the interest of visitors. This year we also presented the new visual identity “100% Papuk” and the slogan “From the mountain that remembers the sea.” in order to encourage local producers to start using a logo that will surely help them market their products and guarantee their customers an authentic domestic product. Particularly joyful is the high turnout of those producers who use this logo, which proves that the people increasingly identify themselves with our park. Such synergy and our geographic position are a strong potential for future cooperation on the wider level, " said Alen Jurenac. He thanked all those who are helping them to realize the projects, and he particularly stressed the selfless contribution of all park employees Papuk in the realization and implementation of the project “Geotales of the UNESCO geopark.” I hope you are convinced that although the project is called “geostories”, we are creating miracles here and not just talking – concluded Alen Jurenac.

Among other things, Deputy Environmental and Energy Minister Igor Kreitmeyer congratulated the park's employees, recalling that he has been visiting Papuk for about ten years now. “This public institution is in charge of carrying out projects at the very top of all of our public institutions: 8 national parks and 11 nature parks. I think the reason for this is that people, starting with colleague Samardjic, who formerly served as director, through the late Kristina Kozic and today Alena Jurenc, who together with all the workers “blow into the same horn”, are pushing the projects as much as possible and are all working hard. We used to be a little scared they were too ambitious. This ambition on geostories is really great in figures and in the amount of sub-projects. This would not have been possible without the strong cohesion of both counties, on both sides of Papuk. Thus we have Infopoint on Jankovac, then road design, camp Duboka and adrenalin park.. These are all sub-projects of the big project, and some of our public institutions would be satisfied with the completion of only one of these sub-projects” - said I. Kreitmeyer, thanking everyone in the Papuk Nature Park for their efforts in realization of the projects.